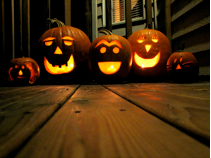 Celebrating Halloween is a recent phenomenon in Spain and in the rest of Europe.  Until a couple of years ago, one could easily walk down the streets at the end of October without finding carved pumpkins or plastic spiders on his way.  Many people may think that Halloween is just another commercial event swept over from the United States, but that’s not entirely true.  In fact, it is the other way round: Halloween is a European “export product”, firmly rooted into our most ancient traditions.  The customs were modified to American taste, and Halloween recently crossed the ocean again towards us in its actual commercial format.  But Halloween is as old and dark…as hell.  Let’s unveil its secrets.


The word “Halloween” is derived from “All Hallow’s Eve”, which means “the eve(ning) before All Saint’s (Hallow) Day”.  You may think by the name that Halloween is a less important event, since it has no name in itself, being “the evening before” All Saint’s Day.  But then we have to consider that this name was given only from the 9th century on, to replace an older name that has its origins way before our christian times.  “All Hallow’s Eve” is the name given by christians to the most important feast on the celtic calendar: Samhain.

The word “Samhain” means “November” in Scottish-Gaelic.[1]  In fact, Samhain was to the Celts what New Year’s Eve is to us.  October 31st was the last day of the old celtic year.  Unlike we do, the Celts started counting days and years out of the darkness.  On the calendar a day started with sunset and the new year started with the dark winter.  It was the moment when the last harvest was done, and cattle either put inside for the winter or slaughtered.[2]  The moment where nature took a rest and the dark cold winter nights entered. Samhain night was the dark, mysterious transition from old to new. People believed that in this particular night the boundaries between the material and the spiritual world could be crossed, that it was possible to enter the world of the spirits and that spirits could also enter the material world.  Spirits were believed to wander outside in the dark night, over the fields and into the villages.  So bonfires wer set on top of the hills both to scare off the evil spirits and to show their own ancestors’ spirits the way to their family’s homes for the winter.  Druids were asked to predict what the new year would bring.

But then the christianization of Europe started with the conversion of the Frankish king Clovis to christianity around 500 A.D.  Soon a whole structure of bishops and missionaries was set up.  Monasteries were founded.  The mission was always the same: the total conversion of Europe, the creation of an ecclesiastical power that cooperated narrowly with the kings and emperors of regions that are the origin of Europe’s biggest nations.  A new world order where there was no place anymore for ancient celtic and germanic beliefs, cults or superstitions.

Or at least that was the plan.  But traditions are tough.

Samhain remained an important feast because people commemorated and celebrated the spirits of their lost ancestors.  This notion is very close to our custom of remembering our deceased family members on All Saint’s Day.  So you can say that both in celtic and christian beliefs, there was a moment where people thought about the dead.  But of both celebrations, Samhain is the oldest.  All Saint’s Day was created as a christian feast around the time of Clovis’ conversion.  But in its origin All Saint’s Day was not on November 1st.  It was on May 13nd.

The christian All Saint’s Day was created in the eastern liturgy around the 5th century A.D. to commemorate all the martyrs at one and the same day.  Before that time, every martyr was commemorated at his own day of death, but over the years there were so many martyrs that it became impossible to celebrate them all separately.  That’s why it became a custom to celebrate martyrs at the same day.  May 13nd was often chosen after a famous homily about “all saints” held by Johannes Chrysostomos in Constantinopel on a May 13nd somewhere at the end of the 4th century A.D.  It is only in the year 732 that All Saint’s Day is instaured by pope Gregory III as an official christian feast, not only for the martyrs but also for the saints and for the dead.

But still, as you see, no link on the calendar between Samhain (October 31st) and All Saint’s Day (May 13nd).  This will change a hundred years later, in the year 834.

The conversion of Europe towards christianity wasn’t easy.  Local superstitions and beliefs remained very strong.  Even today, our European languages are full of references to a pagant past.  Many elements of the old cults were incorporated by the catholic church and are still part of our cultural heritage.  Wherever you live, just think about five odd habits or words and search for the meaning behind them.  Once you scratch the surface, you will find amazing stories.

So, even in 834 and after centuries of missonary work, a lot of old rituals remained.  In the regions north of the Alps, local christian communities had adopted the habit of celebrating All Saint’s Day not on May 13nd, but on November 1st, in order to replace the old important Samhain by its christian answer.   In 834 the French king Louis Le Pieux asked pope Gregory IV to shift All Saint’s Day on the christian calendar towards November 1st, to make sure that the battle with Samhain was won everywhere.  The pope agreed, and from then on the celtic feast lost its meaning, because the next day all saints, all martyrs and all the dead were celebrated anyway.  The rituals that remained became part of folklore, the name of Samhain disappeared and if something was celebrated, it was called “All Hallow’s Eve”.  No references to a celtic past anymore.

The custom remained to light a candle on All Hallow’s Eve.  The bonfires were replaced by candle lights, and the wandering of spirits by people walking from door to door with the light.  To protect the flame, the candle was often placed in a carved beetroot.  Around 1840, many Scots and Irish emigrated to the United States to escape famine after the potatoe disease.  They shipped the custom with them, but since beetroots were hard to find at the other side of the ocean, pumpkins were used to hold the candles.  The scary faces that are carved refer of course to the world of ghosts.  It is in the United States that the name  “All Hallow’s Eve” changed into “Halloween”.  And it’s this Halloween that returned to us, as a commercial event.

But not only the lights and pumpkins have a profound celtic origin.  Witches (from the old English “wicce”) are also part of the commercial Halloween, and they clearly refer to cults and religions before christianity, where women played a far more powerful role as symbols of fertility.  According to several legends, the mother godess Cailleach returned in Samhain (Halloween) night as the Queen of Winter.[3]  All of those godesses were degradated into witches, women to be afraid of, evil women, under the influence of christianity that gave a prominent role only to male priests.  So it is no wonder that witches were associated with the pagant, evil and dark side of the other world, and that they appear as a Halloween attribute.

Spiders and cobwebs[4] are also joining in into our Halloween party.  They are usually part of the attribute of witches, along with black cats, all symbols of fear and bad luck in our culture.  So the commercial format presents us a melting-pot of elements that are narrowly associated with Samhain and in a wider point of view associated with fear or bad luck.  Skeletons may refer to the dead, but they are most likely a commercial addition.

“Traditions are often revered most by those furthest from the source”, the author Clint Twist once stated.  This is oh so true for the Halloween revival.  We find Belgian chocolate in pumpkin shapes.  Interior stores provide us with loads of cheap decoration to turn our living rooms into an orange-black nightmare.  Women magazines dedicate the culinary section to “scary dishes for the kids”.  From New York to Tokyo, children are dressed up like whizzards and witches.  Facebook games integrate the Halloween moment.  The word “Halloween” itself has over 300 million hits on Google.   Tourist offices organize special “Halloween walks”… the list is endless.  For sure, Halloween is more alive than ever, but certainly not in the way our celtic ancestors would have hoped.

An interesting Spanish tradition going back to the 17th century is the preparation of “Los huesos de santo”, a typical dessert made of marzepan, egg yolk and almonds.  It is served around All Saint’s Day.  Its shape refers to a human bone, to reliquies, and freshly harvested almonds were used to prepare it.


[1] On a Gaelic calendar dating probably from the first century A.D. and found in Coligny (a small village in France), the feast is called “Samainos”.
[2] An old Dutch name for November is “Slaughter Month” (slachtmaand).  Cattle was slaughtered, and meat was either smoked or pickled.  Smoked ham is an invention of the Celts, a famous culinary legacy to the world!
[3] some hills in Scotland and Ireland still bear her name.
[4] spiders make either a spider’s web or a cobweb.  “Cobweb” is referring to an old English word for spider, “cob”, which has disappeared in standard English.  However, “cob” or “kobbe” is still the name for a spider in the Flemish dialects that are close to the North Sea.

Royal Society for the Protection of Birds

No a Turquía en la UE